Meet Mee Mechelen was presented at an event organised by the Flemish Environmental Agency (VMM) which over 300 people attended. The event “Samen meten, samen weten” = “Measuring together, knowing together” or “Joint measurements, joint knowledge” was held in Brussels, Belgium on 13 November 2018.The theme of the event was ‘citizen science and air’. Indeed, most of the Flemish administrative departments working on environmental issues (including the cities of Mechelen and Antwerp) were represented.

VITO was invited and used this invitation to present on Meet Mee Mechelen and have a booth which people could visit during the coffee breaks to become informed about air quality issues and the initiative in Mechelen.

Presentations were given by the Flemish administration – with Koen Toté and Michiel Van Peteghem of the VMM – stressing the importance of Citizen Science Initiatives for air quality monitoring in Flanders, VITO, the citizen initiative ‘Leuven Air’, the city of Ghent, and RIVM. 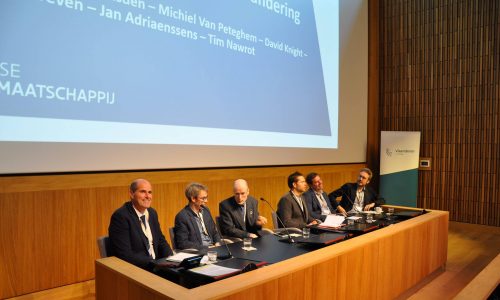 The final spot on the agenda was taken by a panel discussion on the importance of citizen science initiatives for air quality. This emphasised the Flemish administration’s stated support for citizen science initiatives on air quality. They encouraged people to share their data and plan to increase the use of sensor data for assessment and policy making. VWM mentioned the launch of a new website for Citizen Science on Air Quality: https://hoemeetiklucht.eu/

While all attendees were very positive about this support for citizen science, the discussion also highlighted that the citizen initiatives are not receiving much funding. Moreover, it was clear that while there is a lot of interest in air quality in Belgium, spatial planning and road renovations were perceived to need more attention. Currently, most events were seen to be addressing policy makers and city administrations, but it was suggested that it would be interesting to support a networking event for those citizens that are measuring air quality.

Further details and presentations of the event are available at https://www.vmm.be/evenementen/presentaties/studiedag-lucht-samen-meten-en-weten