The EGU General Assembly is an annual event organized by the European Geosciences Union. It is one of the biggest conferences on earth and planetary sciences in Europe and worldwide and every year attracts thousands of scientists, experts and practitioners from all around the world. This year’s event took place from 8-13 of April 2018 in Vienna and was attended by more than 15’000 people from 106 countries. The Ground Truth 2.0 team was actively involved in the EGU 2018 by co-convening the session on “Citizen Science for Earth Systems in the Era of Big Data”, and by delivering a PICO presentation in this session. The session was selected as a recommended session for media presence and was very well attended.

The Ground Truth 2.0 presentation was entitled “The Ground Truth 2.0 generic methodology tested in six citizen observatories” and focused on introducing the ‘people-centered’ approach of the project 2.0 for building sustainable citizen observatories based on the innovative methodologies developed within the project. The PICO presentations (also known as madness presentation!) were followed by interactive discussions with several interested participants next to a touch screen PICO station. The audience was very interested in the thematic diversity of the different Ground Truth 2.0 Demo Cases of the project and was curious about the type of data and information that each Demo Case produces. Moreover, one of the most frequently mentioned questions during the interactive discussion was about the process of finding and contacting relevant stakeholders for the co-design meetings of the project.

Although the majority of the presentations in this EGU session (or for that matter, at the entire EGU General Assembly) were more technically-oriented and the participants predominantly have technical backgrounds, presenting the ‘people-centered’ approach of Ground truth 2.0 for building sustainable citizen observatories was very rewarding. It presented an opportunity to familiarize the audience with this innovative approach and to receive their feedback on the methods developed within the project. 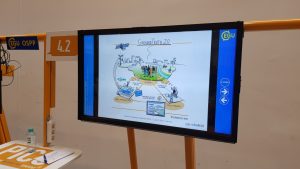 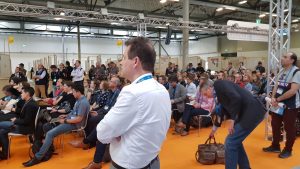 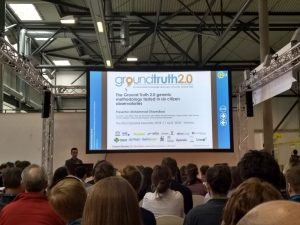