Tygron is participating in two demo cases of the Ground Truth 2.0 project and now active in 3 locations!

For the Belgium demo case two project areas are defined. One is in Mechelen for the Meet Mee Mechelen Citizen Observatory. This project is about air quality and traffic noise. In the Tygron platform the city of Mechelen is build up in 3D and the measurements of the campaigns are visualized in this 3D world. The project in the Tygron Engine is ready to start scenario planning in order to experiment how to handle the air quality and traffic noise challenges together as decision makers, civilians and experts.

The other project case in the Belgium demo case is located in Antwerp in the St Andries district. Here all involved stakeholders are focusing on Heat Stress in the city. Tygron makes use of the heat Stress map of Vito and combines this with the collected data during the campaign where the Akvo tools are being used to mark the cool and heat spots in the city. The goal is to map out the cool spots in the city in order to make citizens aware of the available places to cool down during hot summer days. This is important to help the elderly and other risk full groups health wise. The residents are very motivated to prevent problems, in the event of a heat wave. By using the Tygron Engine an overview is given of possible measures to tackle heat plus the impact of the various measures are made visible. Because in the Tygron Engine all stakeholders are represented the issues in the neighborhood can be brought to the attention of administrators and all other involved stakeholder groups. Platform is also very suitable for this and is used as a conversation tool to address and solve these kind of issues together.

The plus side in St Andries is that there is no lack of initiatives and the Citizen Observatory members are very motivated to take some actions. However, it is still a challenge to put the energy on those things that have an impact, also in view of the relatively short time remaining in the Ground Truth 2.0 project.

The next step is to implement the data that is gathered so far in the neighborhood during the measurement campaigns in the Tygron Engine to make it visual in a transparent place. This will be done in the upcoming weeks and can be presented in the Ground Truth 2.0 week at the beginning of October 2019. 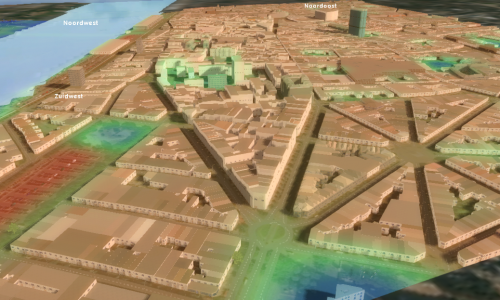 The Swedish demo case is focusing on the Dunkern area, a rural region North-West of Stockholm. This project is all about water quality in this area. Citizens take measurements of the water quality and in the Tygron software the effects over time are calculated and visualized.

Dunkern, is making use of the project that is been created in the Tygron Engine. In the spring of 2019 Godelief Abhilakh Missier, one of the project managers of Tygron, went to Stockholm to present the project that has been created so far to the Citizen Observatory members. People of Stockholm City and Stockholm Vatten where very enthusiastic about the project. Unfortunately not all invited members could attend because of the snow and the lack of trains. After the meeting we started working on the new project. We took home the feedback and combine this with the newest technology in the Tygron Engine. This results in a new version of the project in the Tygron Engine that includes both the Dunkern area and the Flen area, just like the Citizen Observatory members have been asking for from the beginning. This new project will be ready to use in the Ground Truth 2.0 week in the Beginning of October 2019.