Air quality is currently a hot topic in many European regions, not at the least Flanders in Belgium where the Meet Mee Mechelen citizen observatory has been launched about a year ago. During the first year, the air quality has been monitored in the city of Mechelen during four campaigns, one in each season. To round off these campaigns, a well-attended public event was organized. About 200 locals attended the presentation of Meet Mee Mechelen’s results highlighting the spatial and temporal variability of air quality in the city. During the second part of the event, all volunteers had the opportunity during workshops to share their opinions on how to further improve the quality of the air we are breathing. 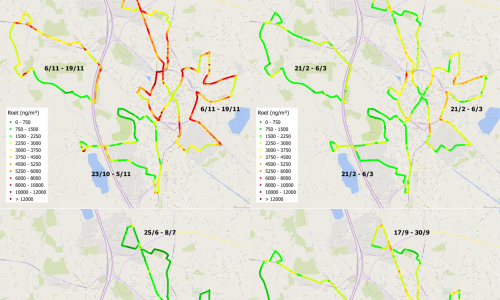 A group of about 50 volunteers of Meet Mee Mechelen measured the concentration of soot – black carbon – in the air using mobile sensors. Four cycling trajectories of 10 km through the city have been selected with a mix of locations ranging from parks and traffic free zone to the dense traffic along the ring road. Each campaign lasted for two weeks. Each day four cyclists measured the soot concentrations along all four trajectories during the morning and evening rush hour. The average concentrations during these two weeks periods present a robust view on the air quality situation in the city. The maps highlight the strong relation between traffic intensities and pollutant levels. Other important factors are the distance between the cycling lane and the traffic, impact of traffic lights and traffic jams and the type of environment. significantly increased concentrations are found in so-called street canyons, streets flanked with buildings on both sides. Soot concentrations in Mechelen have a high spatial variability.

Air quality depends heavily on weather conditions. Higher concentrations are found during stable weather conditions with low speeds and less ventilation of traffic pollution. The four seasons of Meet Mee Mechelen show a very similar spatial pattern but much lower concentrations during summer than the autumn campaign which had stable atmospheric conditions. All results can be analyzed in detail on Meet Mee Mechelen’s website.

The findings from the air quality campaign where presented by Meet Mee Mechelen at a public event to an audience of about 200 locals. Besides MMM’s own results, the outcomes of the Curieuze Neuzen citizen science project on air quality where presented. 20.000 Flemish citizens participated and measured the air quality at their door step. All outcomes where discussed in workshops where all participants shared their opinions and concerns. The event was well received and attracted media interest for air quality during the final week of the political campaigns prior to local elections.

During the second year of Meet Mee Mechelen, efforts will focus on supporting and initiating actions to improve the air quality and reaching a broader audience in Mechelen. 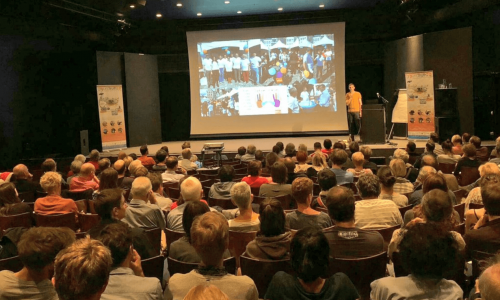