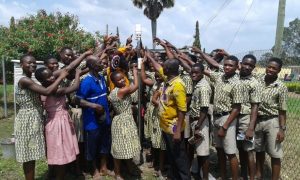 It has been touted that people’s perception about the accuracy of weather information in Africa is lower than those in other continents, especially Europe and America. The 10-day forecast in Europe and America is as good as the next day forecast in Africa. Changing this perception requires a lot of effort in terms of resources – physical infrastructure such as weather stations, satellites, models but also much more importantly human resources to run Numerical Weather Prediction (NWP) models in the cloud and interpret the results in a much more meaningful way to end users such as farmers, fishermen, government officials (e.g. Park rangers) and tourists, as is being done for the Ground Truth 2.0 project. There is a huge gap in Africa to address such needs and efforts. One organisation, country, development partner or government cannot do it all. Hence, there is the need for a concerted effort and trust among partners to solve the problem which has existed for decades now.

Trans-African Hydro-Meteorological Observatory (TAHMO) has stepped up with the support of other African, USA and European Partners to fill the gap by developing a cost effective weather station (ATMOS 41) with the METER group based in the USA and Germany and installing these stations together with National Hydrological Meteorological Services (NHMS) to improve the density of ground observation network in Africa with the aim of providing a station every 30km. The challenge in Africa with regards to environmental modelling consists of inadequate ground observation systems and the lack of maintenance of existing ones. The station designed (ATMOS 41) has no moving part, hence requires less maintenance. TAHMO intends to install 20,000 of these stations across Africa.

The TAHMO stations are installed in schools for three main reasons: 1. Schools, churches and mosques are often seen as safe havens during disasters and provide some protection for the stations; 2. Teachers and student environmental clubs provide support in maintaining the stations by dusting them and cleaning the solar panels on a regular basis; and 3. The data collected from the station is used to support Science Technology Engineering and Mathematics (STEM) education in these schools so the stations do not become white elephants at the schools; rather, they are used to train the next generation of citizen scientists.

In the Ground Truth 2.0 project, TAHMO is participating in the Kenya and Zambia Demo Cases. For the Maasai Mara Citizen Observatory, TAHMO has already installed four weather stations at locations jointly decided with the members of the co-design group of the observatory. The data of these weather stations is feeding into and available on the online platform of the observatory. The process of selecting suitable locations is still ongoing for the Zambia Demo Case.

You can follow the TAHMO school2school Initiative for more information on the program or contribute to it. If we want to build a “better tomorrow” for Africa, then we need to invest in the education of our future leaders in schools now. Students are our best weather ambassadors in Africa.

This blog post was written by Frank Annor from TAHMO